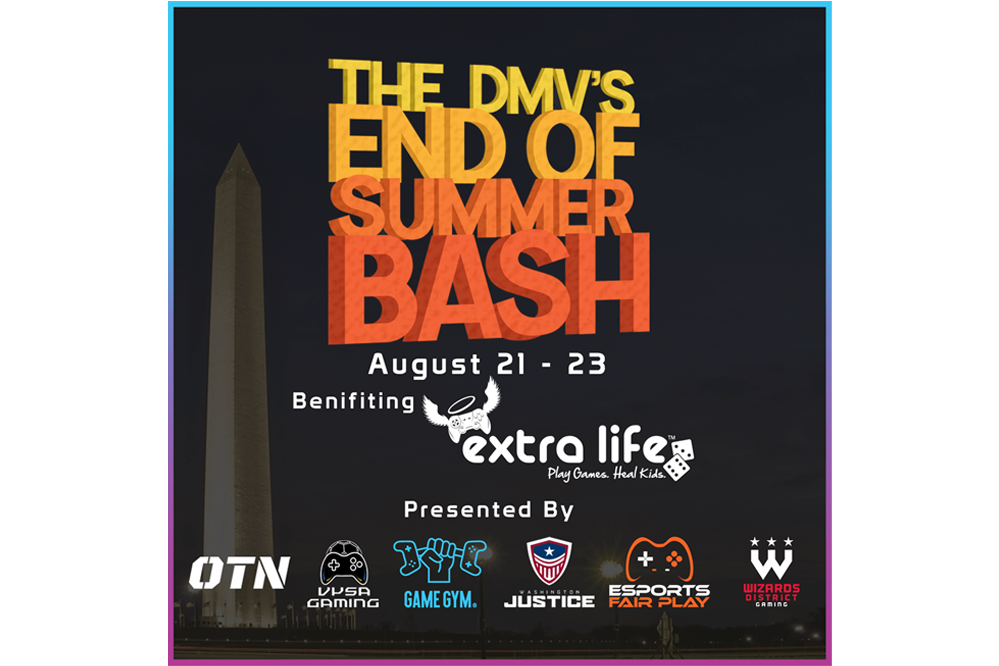 The DMV’s Esports Orgs Announce the End of Summer Bash!

The premier esports organizations in the DMV have teamed up to raise money for the Extra Life Foundation and Children’s National Hospital here in DC. Game Gym, Washington Justice, Wizards District Gaming, Virginia Youth Soccer Association, The Overtime Network, and Esports Fair Play are proud to announce the DMV’s End of Summer Bash!

Taking place August 21 – 23, the DMV’s End of Summer Bash will be jam-packed with panels, tournaments, and giveaways for parents, gamers, and the local esports community to enjoy. The Bash will be broadcast live on Twitch and proceeds will go to benefiting Children’s National Hospital through the Extra Life Foundation. Each day will feature Ted Talk style presentations, panels on hot-topics in esports, youth showcases, and tournaments featuring the best local competitors. “By partnering with the other esports organizations and Extra Life to benefit the Children’s National Hospital here in DC, we are really giving back to our local community in one of the most needed and impactful ways,” said Game Gym CEO Josh Hafkin. “I couldn’t be more proud that we were all able to rally behind this cause, and we are so stoked for what’s in store for everyone this August!”

For more information on the End of Summer Bash, head to https://gamegym.com/summer-bash.

Interested in sponsoring the End of Summer Bash? Reach out to event lead Josh Hafkin (Josh@gamegym.com) and follow the participating orgs on social for even more exciting news as the summer continues.

Extra Life, a gaming marathon, unites thousands of gamers around the world to play games in support of their local Children’s Miracle Network Hospital. Since its inception in 2008, Extra Life has raised more than $40 million for local CMN Hospitals. Extra Life participants play to raise funds and awareness for Children’s National Health System, the leading provider of pediatric healthcare in the Washington, DC region.

Game Gym is an esports team and training center that offers a healthy and holistic approach to video games, with live and online structured sessions and certified coaches designed to help children and teenagers game better and smarter. Game Gym From Home offers online afternoon sessions every weekday that allow participants to receive personalized instruction from coaches, plus team-building and supervised gaming blocks.  Camp From Home offers full-day, week-long summer camp sessions that include a combination of game play and game training with nationally recognized pro players and coaches, as well as life skills sessions focusing on health and fitness, game design, and other key topics. Learn more about our mission and memberships at www.gamegym.com

The Washington Justice is the DC-based team representing Maryland, Virginia, and DC area in the Overwatch League, a global professional esports league. Founded in 2018, the Justice brings DC to an international level competing against teams from Los Angeles to Shanghai to Paris. Sponsored by Events DC and PenFed Credit Union, the Washington Justice is bringing local esports events to DC!

Wizards District Gaming is part of the NBA 2K League, a professional esports league co-founded by the NBA and Take-Two Interactive Software, Inc. Launched in 2018, the league features the best NBA 2K players in the world. Wizards DG draft and/or retain six gamers as part of a team that competes as unique characters in 5-on-5 play against 22 other teams in a mix of regular-season games, tournaments, and playoffs. For more information about Wizards District Gaming, visit http://www.wizardsdg.com/ and follow the team on social media @wizardsdg.

OTN Media’s mission is to provide sports, gaming, & esports enthusiasts with unique, stimulating content and an inspiring community to compete in, chat with, and play alongside. From recording weekly podcasts to producing streams to shoutcasting live events, OTN is here to educate and entertain audiences of all shapes and sizes. OTN has worked with nearly all of the professional sports and esports teams in the DMV area, alongside other high-profile organizations from Microsoft to NBC.

At Esports Fair Play, we believe in bringing the esports community the ultimate gaming experience both in-person and online. We pride ourselves on creating an exciting environment where gamers can come together, engage with one another, meet new people, improve their gaming skills and have fun with good sportsmanship. Esports Fair Play has hosted numerous Esports tournaments at venues such as Microsoft Stores, restaurants in the DMV area and has also collaborated with the local D.C. professional sports teams.

VYSA Gaming ® is part of the Virginia Youth Soccer Association serving over 160,000 players, coaches and administrators in Virginia and the District of Columbia. VYSA Gaming ® provides unique family-friendly esport gaming opportunities including tournaments, leagues and camps for youth and adults interested in the esport gaming experience.